The TIN model represents a surface as a set of contiguous, non-overlapping triangles. Within each triangle the surface is represented by a plane. The triangles are made from a set of points called mass points.

Mass points can occur at any location, the more carefully selected, the more accurate the model of the surface. Well-placed mass points occur where there is a major change in the shape of the surface, for example, at the peak of a mountain, the floor of a valley, or at the edge (top and bottom) of cliffs.

The TIN model is attractive because of its simplicity and economy and is a significant alternative to the regular raster of the GRID model. 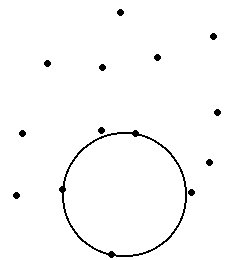 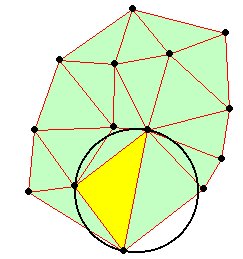 Contours are a common source of digital elevation data. In general all the vertices of the contour lines are used as mass points for triangulation. In many cases this will cause the presence of flat triangles in the surface.

Flat triangles are frequently generated along contours when the sample points occur along the contour at a distance that is less than the distance between contours. When these "excess" vertices are not removed , the Delaunay triangulation discovers that the closest sample points are those along the same contour, causing the generation of flat triangles.

The flat triangles have a slope of 0 and do not have defined aspect. They might cause problems when the surface is used for modeling. 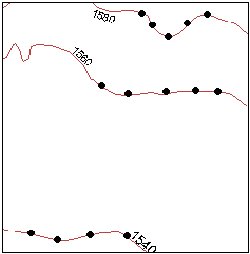 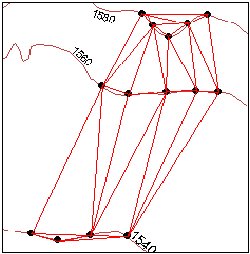 The triangulation - We can see several flat triangles here 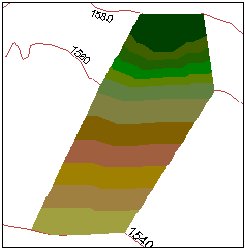 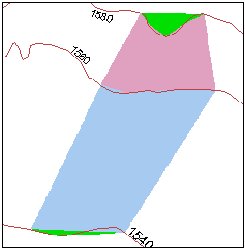 How can we avoid the flat triangles?

Linear features which define and control surface behavior in terms of smoothness and continuity are called break lines. 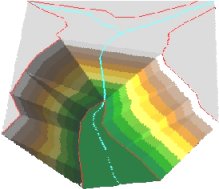 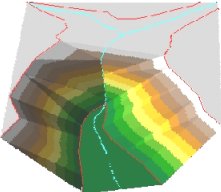 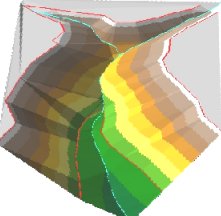 There are basically two ways of storing triangulated networks: